April has just about come and gone. It seems I have neglected blogging. I guess you can say this hasn't been a stellar year in regards to blogging. Period. I have no excuse other than a lot of things have been going on, in work, in school and in the real world life. I admit something has to give, in this terms my writing.

Does the thought make me happy? No I find comfort in words and sitting behind the mask of them. But what happens when they don't come? When you have no energy for the thoughts, nor exactly know how to say them, when to say them and how to express them without getting to personal?

And believe me right now? That is exactly how I feel about them.

But I realize I started this blog with the promise of actually blogging, sharing and communicating it all to the world, including to both people I know and don't. Maybe at times, it is not as frequently as I would like, and maybe that is OK. There are far to many things that believe it or not are more important than rushing home and blogging about. Life happens outside the walls of social media.

All I ask, is that you bare with me. Things will be said when the time is right, and if it is alright. But until then. well until then hopefully May will bring some more creative writing and a better understanding of a lot of things....
Posted by Aleisha at 10:17 AM No comments:

Email ThisBlogThis!Share to TwitterShare to FacebookShare to Pinterest
Labels: blogging

Remember back in January, when I began the semester I swore it was going to be the longest one yet...funny thing happened. It is just about over.

I walked in last night, plopped my things down and prepared to sit through two groups presentation, the last of the semester. They were going to be long and boring because lets face it most of them are. Half of the class wasn't even going to show up I bet-later I found out they didn't.-and the other half would be pretending to pay attention when really they were more into their phones and laptops. And that was when it hit me, this was our final 'class' Sure there would be a review for the exam next week, with the exam the week to follow but that is it. No m ore papers to turn in or homework to rush home and do.

The semester is just about done. Imagine that.
One less to go.

In all honesty, I can't believe it has come to this already. A lot of things have happened in the past couple months, making January seem like ions ago. And yet it feels like it was just yesterday at the same time. Perhaps the classmate in front of me said it best when she said that every semester she feels like she is ready but the moment she walks through the doors she is done. But by the end of the semester she is already looking forward to the next. In a way, I am the same. I am now entering the final home stretch of my college career. And within three weeks I will begin my final countdown to 52 weeks before graduating....

Graduating. I never thought I would see it.

56 weeks and counting.
Posted by Aleisha at 9:08 AM No comments:

Email ThisBlogThis!Share to TwitterShare to FacebookShare to Pinterest
Labels: mason

Tonight the race for the cup officially begins for 16 teams. None of which are the Caps as we all know.

It is a strange strange feeling for sure.

I mean after all for the past seven years by this point I would be totally ramped up for them. I would be decked out in Caps colors, proudly display my bracket-forget about the NCAA bracket, its all about the hockey one here- and count down the very moments until that puck drops. I try to do work, which doesn't usually happen because I have half my office stopping every five minutes to ask me about the game, what do I think the outcome will be, how do I feel about the whole thing. Etc, etc, etc...

This year there has been none of this, no one has stopped other than to ask me to print something, scan something or enter something into a database. The bracket remains empty and the only colors that remotely resemble anything Caps is in the flag that remains up in my cube.

Yes it is strange indeed.

The only consolation in the whole not making playoffs is this: We will not have to endure the next week of speculations of just how long we will make it, how we just barely got in, in the first place and should we not make it past the first round, there will be no talk of what should have been. Believe me, that part of the playoffs I for one will not miss. We are now just left with the wondering of what next year will bring, next coaches? New GM? New players. All of the above, none of the above-which lets face it, something is going to happen.-and the thought that next year will be our year. Because we are Caps fan and what else would we think at this point.

And strange as it is not to see my beloved team in there, I will still be watching the playoffs, after all not only is there nothing like it but my other team (Boston) does happen to be in, so while the Caps are busy perfecting their golf swing, I will have to root for them...after all, it is the cup.

And despite who wins, and as mentioned.
There is nothing like playoff hockey...
Posted by Aleisha at 9:17 AM 2 comments: 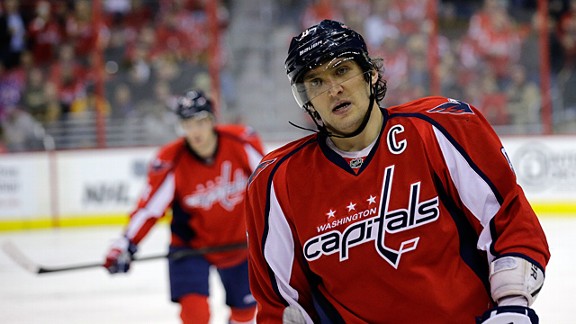 Lets face it. We knew this was coming. We may have hoped, we may have held on to the little bit of faith that maybe just maybe we could make it into the playoff spot. But ultimately we knew it was going to not be a pretty ending to the season.

Still, it doesn't mean this an easy pill to swallow.  Especially considering for the past six years we have not known this feeling. Yes, we may have been on pins and needles waiting to hear if we made it through, each game meaning a whole lot more than the last. But it has not been this definite. Not in a good long while. I forgot almost what this feeling was like.

It is odd I will admit. I woke up this morning thinking, we have three games still to play. Three games which means little anymore. Come Sunday, the season is over, and we get to wait til October to even begin to think about making it to playoff hockey standards. Three...

I wondered if I even wanted to watch, does it matter at this point? But of course I knew I would.

And like many, I began to wonder and suspect things will change come, as soon as Monday more in likely. I have my predictions. Oates? McPhee? Quite possibly. Both. I am sure you will see a lot of players come and go. I do not expect the same team to be hitting the ice come training camp that we see on the ice at the moment. Perhaps its time. I think something needs to come if we ever want to be a contender. What that may be I am not exactly sure. But it has to.

The time for rebuilding needs to start again.
From scratch.
Posted by Aleisha at 9:05 PM No comments:

And he is registered.

Rolling up to the school yesterday, my five year old son sat in the back seat looking around. To him it was like Christmas morning again. To me, it was the start of something more. He babbled on about the playground, about the school itself.

No, this was not the first day of school, yet if the emotions that were playing in my mind were any indication I don't even want to imagine what that day in the not so distant future anymore is going to be like. But it may as well have been.

We dropped off the paperwork, answered a couple of questions. I looked around, wondering when he grew up. When did I become a mom of a soon to be kindergartener. She asked if he was ready. Maybe the question should have been whether the mom that was sitting across from her was the one that was ready.

I said yes of course and she nodded good then showed us around, at the library his only worry was whether they had Star Wars books or not. At the gym, he just wanted to know if he could shoot a basketball. And in the music room he declared he loved music, which seemed to please the music teacher very much.And at the cafeteria, all he wanted to make sure they knew he couldn't have real milk. All of which seem to be pretty important to a five year old.

Afterwards we jumped back in the car and headed out. Little man just beaming...'That is a big school mommy.'

Aleisha
Disneyholic, hockey widow and mom of one. Caffeine addict, music lover. Dreamer and pixie dust believer. Mother to a Jedi. Wife to a hockey guru. Writes about Caps hockey, Disney, Life, Motherhood and every now and then, bad poetry. Enjoys the journey.